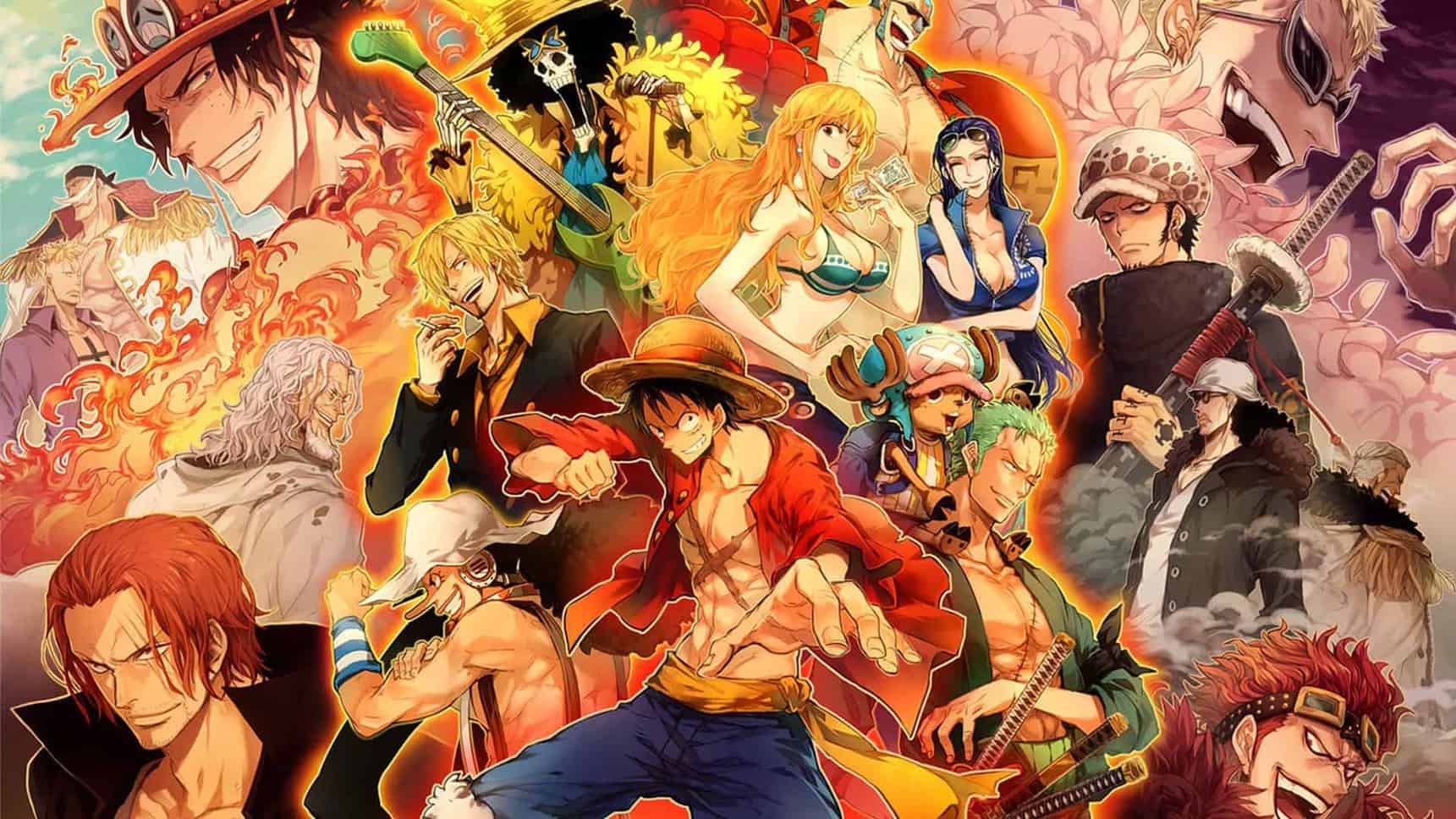 One Piece is a Japanese manga series written and illustrated by Eiichiro Oda. Here I’ve collected some of the most awesome One Piece Quotes you will not forget.

One Piece has been serialized in Shueisha’s Weekly Shōnen Jump magazine since July 1997, with its individual chapters compiled into 98 tankōbon volumes as of February 2021. The manga spawned a media franchise, having been adapted into a festival film produced by Production I.G (“Shingeki no Kyojin, Haikyuu!!, Vinland Saga“), and an anime series produced by Toei Animation (“Dragon Ball, World Trigger“), which began broadcasting in Japan in 1999.

2. It is shameful… for a swordsman to be him from… behind. – Roronoa Zoro

3. You think risking your own life is enough? Try risking our lives along with yours! WE’RE YOUR FRIENDS! – Monkey D. Luffy

5. Don’t hesitate. Who can we rely on if you falter? – Roronoa Zoro

6. When all I want is to learn of the history, there are too many enemies within my dream. – Nico Robin

8. I know I need friends to help me if I want to get ahead in life! – Monkey D. Luffy

10. I heard everything from him. You want to save a defenseless girl right? I will lend you a hand for free. – Usopp “Sogeking”

11. Sorry, but I’ve never actually prayed to God. Why should I pray to someone I don’t believe in? – Roronoa Zoro

12. You came without fear. Don’t have any regrets, no matter what happens. This is the duel you wanted. – Monkey D. Luffy

14. When does a man die? When he is hit by a bullet? No. when he suffers a disease? No. When he ate a soup made out of a poisonous mushroom? No! A man dies when he is forgotten! – Hiluluk Doctor

15. Everyone has things they can and cannot do. I’ll do what you can’t do and you do what I can’t do. – Sanji

17. Aren’t you the one being hurt? The government says your existence is a crime, but no matter what kind of weapons you may hold, just being alive isn’t a sin! THERE’S NO CRIME IN LIVING!!! – Franky

18. It doesn’t matter if its as a devil or a saint, my name will be heard all over the world! – Roronoa Zoro

19. Pirates are evil? The Marines are righteous? These terms have always changed throughout the course of history! Kids who have never seen peace and kids who have never seen war have different values! Those who stand at the top determine what’s wrong and what’s right! This very place is neutral ground! Justice will prevail, you say? But of course, it will! Whoever wins this war becomes justice! – Donquixote Doflamingo

20. There is no such thing as being born into the world to be alone! – Jaguar D. Saul

22. Friends or foes? That’s something… you’ll have to decide on your own! – Monkey D. Luffy

23. You’re Hordy, right? I guess I have to kick you ass. You can become king of whatever you want in any country. But there can only be one King of the Pirates! – Monkey D. Luffy

24. I have no sympathy for criminals but for my family, I do. – Monkey D. Grap

25. It’s wrong to resent a child for the sins of his father. – Edward Newgate “Whitebeard”

27. Power isn’t determined by your size, but the size of you heart and dreams! – Monkey D. Luffy

29. Hero? No way! We’re pirates you know! I love heroes but I don’t want to be one! Do you even know what a hero is!? Say, you have some meat. Pirates will feast on the meat but a hero will divide it amongst the people! I want to eat that meat! – Monkey D. Luffy

31. All for one, one for all! There are times when a man has no choice but to act! – Brook

32. Being alone is more painful than being hurt. – Monkey D. Luffy

33. It’s not about possible or impossible. I’m doing it because I want to, I decided to become the Pirate King and if I die fighting for it, then that’s that! – Monkey D. Luffy

34. Have you ever seen a fierce animal you were sure would never bite? Because I haven’t. – Roronoa Zoro

35. No matter how dark the night, it always turns to day eventually. – Brook

37. Compared to the “righteous” greed of the rulers, the criminals of the world seem much more honorable. When scum riles the world, only more scum is born. – Eustass Kid

38. Either in belief or doubt, if I lean to one of these sides, my reaction time will be dulled if my heart thinks the opposite of what I choose. – Roronoa Zoro

39. The weak don’t get to choose how they die.- Trafalgar Law

40. There is someone that I must meet again. And until that day… not even Death himself can take my life away! – Roronoa Zoro

41. When the world shoves you around, you’ve just got to stand up and shove back. It isn’t like you can do anything just by giving excuses. If I die, then I am just a man who can only make it this far. – Roronoa Zoro

42. I don’t wanna live a thousand years. If I just live through today, that’ll be enough. – Portgas D. Ace

43. I would never wich for you to be consumed by anger and hatred on my account. – Otohime

44. Our bond can’t be broken even if anyone tries. – Sabo

45. Because ‘D’ will definitely, bring forth another storm! – Trafalgar D. Water Law

46. Things always have a core. And if you strike it, you turn any situation around. – Sabo

47. Neither God nor the Devil can give aid to those without the will to fight… – Brook

48. Whoever has a pure heart, has a fervid imagination as well! – Franky

49. What I men by “rich” is not having so many things. It’s about heart. – Donquixote Homing

50. Children are idiots! They think their apologetic tears will guarantee forgiveness! – Baby 5

51. The weak have no choice about how they die! – Donquixote Doflamingo

52. I’m a sniper! Covering someone is what I do best! Shoot an enemy without being seen to protect my friend! – Usopp

53. It’s an all or nothing gamble. I’m determined to bet my life on it. However… if you lose your dice, the game is over before you even roll. – Issho “Fujitora”

54. Getting upset over a kiss or two makes you just an immature little tramp. So don’t talk about love or relationships or that sort of stuff! – Franky

55. Don’t forget! I’m the man who’s destined to become the greatest swordsman in the world one day! – Roronoa Zoro

56. Did you guys know?! We can become brothers if we exchange this cup of sake! – Portgas D. Ace

57. Even if it meant our kingdom’s demise, we’d never rat out one of our friends to the enemy! – Nekomamushi

58. Being the king of the pirates, isn’t becoming a great man, but being… FREE! – Bartolomeo

60. The weaker a person is, the more he gets hung up on other people’s pain and then he self-destructs. – Donquixote Doflamingo

61. I have no chance to survive now but… will you remember me even after I die? I’ll die with a smile so… Because if you think of me someday, I’d rather you remember my smile. – Donquixote Rosinante “Corazon”

62. I’m sorry that I lied to you… I lied because I didn’t want you to hate me. – Donquixote Rosinante “Corazon”

63. If we lose credibility just by admitting fault, then we didn’t have any in the first place! – Issho “Fujitora”

64. A man shouldn’t grumble like that after a die has been cast. – Issho “Fujitora”

65. Every time these hands and feet back down, our defeat in this battle and sure demise inch closer! Prepare yourselves and keep hanging on! – Bartolomeo

66. You got in my way! You made my friends cry and made my crewmate mad! But you still haven’t fallen so I will take everything upon myself! I won’t let anybody die! – Monkey D. Luffy

67. You see unlucky people everywhere in the world. If you try to save them all, there’s no end. – Donquixtoe Doflaming

68. Although I couldn’t protect your mother, I’m gonna protect you to the end, with my life! Until the day you are filled with happiness, I will always be by your side! – Kyros

69. Feeling pain is proof that I am a human! I know you people don’t understand! The hopelessness of being forgotten by somebody you love! – Kyros

70. It’s worth entrusting our captain with our lives!!! Luffy has always been, or winning trump card!!! – Nico Robin

71. When somebody offers you a drink at a bar, if you’re truly a man, you can’t pull your glass away! – Franky

72. Every cook has a duty to make sure that every bit of their ingredients is used with love. Just like loving every bit of a lady. – Sanji

73. There is no victory in this world, that somebody can win all by himself. – Ideo

74. I know I’m an idiot but even an idiot has his principles that he must stick to! – Bellamy

75. Our captain isn’t someone who would just ‘go’ under someone else’s command!! He’s the man that will one day be the King of the Pirates!!! – Sanji